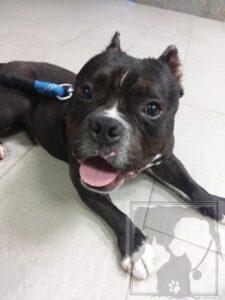 Since Jan. 6, 2018, the date that the governor signed into law the change for humane law enforcement to be the responsibility of police departments rather than the various state and county S.P.C.A. organizations, not a day goes by that I have not been thankful for the release from that untenable burden on our shelter. That said, there have been many growing pains as our police departments and prosecutors learn the ropes of responding, investigating, enforcing and prosecuting the animal protection laws of the New Jersey.

Let me put a face on this, a very adorable face. This is the long, convoluted story of a dog named Ninja. He’s a little sawed off, squat, bully breed mix that has been in the shelter for 238 days. Yes, you’re reading that right, more than seven months stuck in here after being impounded on Nov. 22, 2019.

He was wobbly on his stubby back legs, indicative of some type of neurological problem, and his front legs were a little deformed. He also had multiple wounds at various stages of healing. Plus he had ear mites and was positive for hook, whip and round worms. Needless to say, he was a wreck.

The dog was picked up in Upper Deerfield and his owner originally gave a non-existent address in Bridgeton. But he said the dog was staying with his sister in Millville but that actually turned out to be in Vineland. So whose court was the case finally remanded to?

I made repeated attempts to find out the status of the case – contacting the troopers and the prosecutor’s office. Of course, a few months of this was during the shutdown which further delayed getting the case through court.

But it wasn’t until a desperate plea on our part to expedite some resolution that we discovered that the municipal prosecutors in charge of these type of cases are not informed that an animal is being held for court.

Last week a virtual hearing was scheduled for Ninja’s case, but the owner of the dog did not pick up on the call. So, still we wait. Ninja waits. Will it be rescheduled?

Who will be responsible for the bill if the owner does not show up, or if he is not found guilty or if he simply does not pay? Seven months of boarding and a load of veterinary care is a big tab and our shelter has been shouldering the bill all along.

But more importantly, what about Ninja and all the other animals that are likely to get caught up in the slow wheels of justice? I am hopeful that bringing light to Ninja’s plight will help the police and prosecutors in our county identify and expedite these types of cases, but that still leaves the judiciary.

Cases are often postponed for one reason or the other and since the legislature can’t dictate to the judiciary on how and when to do things, the judiciary will need to find a way to get the cases involving impounded animals adjudicated in an efficient and timely manner.

In all honesty, Ninja has a lot of issues and will require a very special rescue or person to deal with all of his medical and behavioral issues. Fortunately, he has taken to several of our staff members and they are able to give him attention and love every day. He has trouble walking, especially on hard floors, but we are able to get him into the play yard daily for some fresh air and grass under his feet.

Regardless of the outcome, no pet should be allowed to fall through the cracks of the justice system because there is no adequate system in place. It’s well past time for our lawmakers and judiciary to step up to the challenge and stop allowing these innocent victims to suffer further.

Source: Stuck at the shelter, Ninja awaits his day in court – 238 days and counting