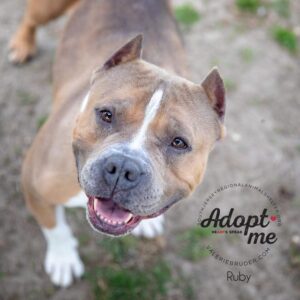 "If having a soul means being able to feel love and loyalty and gratitude, then animals are better off than a lot of humans." - James Herriot

I am often amazed at the resiliency of animals. Their ability to adjust to new circumstances is incredible. We humans should take a page out of their book in that regard.

Whereas we can be upset by the slightest change in our routine or circumstances, pets most often seem to embrace the present and adapt to their current living conditions quite easily. We often hear stories from our adopters telling how their new pet settled into their homes as if they had always been there. For some animals, their survival depends on this as their circumstances may change many times over. This has never been more true than with one of our favorite alumni.

Ruby is a gorgeous white and brown pit mix whose history actually started somewhere in Camden County. About five years ago, she was picked up by animal control and taken to the Camden County shelter. She was adopted from there to a family that had her for about four years until they moved and could not take her to their new home. And so, she went back to the Camden shelter.

At that point, she was about 5 years old, a serious handicap when it comes to being adopted. Thus, she sat in the shelter for months with no interest. Back in March, our shelter did a swap with Camden County, changing out a few of our superstar dogs that had been sitting for far too long. We were hoping that they might benefit from being seen in a new market. Ruby came to us in that swap and we were instantly in love with her. She has a stunning appearance, she loves everybody and even likes having feline friends.

In spite of all her attributes, she remained in our care for a few months until a new family came in and took her home. Six weeks later, her owner was transferred for his job and things got rocky for Ruby. And so, she came back to our shelter.

A month later, she was adopted again by a young couple that really seemed to connect with her. Less than two weeks later, however, the lady realized that she was pregnant and felt that she could not handle a new baby and a dog. The family did not want to give her up and initially sent her to live with a relative. It turned out that Ruby could not stay there because the landlord would not allow a bully breed. And so, she came back to our shelter.

Our staff was devastated to see her get returned once again. Every family that had adopted her had raved about her, assuring us that she was a fantastic dog and that it was nothing she had done that prompted them to return her. We were so disappointed for her; at 6 years old she had spent more than a year of her life in a shelter. She had lost at least one home before ending up at Camden initially and three more since then.

As soon as she came in, we posted her on our Facebook page; within 45 minutes she was adopted again! From pictures posted of her in her new home, it looks as though she's already taken over the couch and settled in. Her new home came highly recommended and this time, we hope it's for good.

As we've pointed out many times in this column, pets are a big responsibility and it's imperative that the decision to bring one into your home be thought out. Although they may be very resilient, it's not fair to them to be bounced around and treated as something disposable. As we approach the holiday season, many families will be considering a new pet; we hope you'll choose wisely and with a true sense of commitment. Our adoption counselors are happy to assist if you have any questions about what might be right for you.

Happy Thanksgiving to you and your family!

Source: Think about it and choose wisely when considering adopting a pet