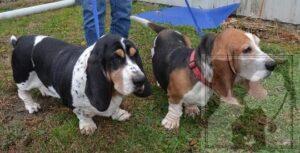 This is the story of George and Charlie, a story that will hopefully have a very happy, yet bittersweet ending this week. George and Charlie are a couple of six-year old basset hounds, George is a male, Charlie is a female. They've hit a bit of a rough spot over the past couple of months, but they've been very lucky to have a team of people looking out for them during their recent upset.

On October 8, this dynamic duo was traveling with their owner from New England to Florida. As they drove through New Jersey, their owner suffered a medical emergency and ended up in the local hospital. The dogs were brought to the shelter to be cared for temporarily in hopes that they could be reclaimed and continue on with their journey. We stayed in touch with the hospital and the owner, but two weeks later it became clear that the situation would not be resolved anytime soon.

It was obvious that the dogs had been very well cared for and neither the shelter staff or the hospital staff could stand the thought of them not being able to go back to the person who had loved and nurtured them all of their lives. The dogs, however, could not stay at the shelter and we were all desperate to find a place for them while the owner was given more time to recover.

The cry for help was answered by the good people at Pampered Pup Luxury Pet Resort. Between our shelter, the hospital staff and the crew at Pampered Pup, we managed to cobble together a plan to support the dogs a little longer. The shelter staff delivered George and Charlie to the boarding facility on October 24 with the expectation that they would be reclaimed in time for the Thanksgiving rush.

Unfortunately, that did not come to pass; their owner was still incapacitated and facing transfer from the hospital to a long-term care facility. Hopes of reuniting the trio had to be abandoned; heartbreaking for their owner and a terrible disappointment for all of us who had tried so hard to keep them together.

George and Charlie were returned to the shelter on the day before Thanksgiving and are now available for adoption to a new home. They must go together. They are very bonded and have suffered enough loss without having to go through any sort of separation.

They are funny and terribly amusing, as are most bassets; a couple of sweet lugs that love attention and short walks with their nose to the ground. George is quite the charmer and Charlie knows how to use her sad eyes and comical countenance when her orneriness gets her into trouble. Whoever ends up adopting this pair of comedians is guaranteed lots of entertainment with their new charges.

It's almost impossible to be prepared for every misfortune, but as we've discussed previously in this column, it's important to have a backup plan for your pets should you suddenly become unable to care for them. George and Charlie are lucky in that they are healthy, highly adoptable dogs, so the impact of their owner's decline, although traumatic, should fade quickly as they adjust to a new home.

We want to thank the staff at Pampered Pets and the hospital for all their help and compassion in this difficult situation; it may not have ended perfectly but at least it will end well for the dogs.

Source: Hoping these two comedians find a happy home together