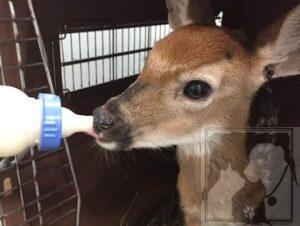 Last week we had two special guests in the CCSPCA shelter: our first fawns to be brought in for transport to a wildlife rehabilitation center. Does generally give birth from late May through the end of June, so the season is upon us.

The first one was found in the farmland area of East Vineland. The animal control officer responded to a call from a concerned citizen and found the little guy stuck in a ditch alongside the road. The young deer was feisty, but full of ticks and low in body weight, and the animal control officer felt it could not be left in hopes of having the mother return. The tick infestation alone was cause for concern because it is not normal in fawns being attended regularly by their mothers. Plus, there was concern that it was stuck in a drainage ditch amid the crazy weather we’ve been experiencing.

The little deer was placed in a large dog kennel and transported to the Cumberland County Society for the Prevention of Cruelty to Animals shelter, where it rested quietly until the wildlife rehabilitator picked it up later that afternoon. Other than a few bruises suffered by the officer – little hooves can create some serious black and blue marks when they come in contact with human skin – the endeavor to save the fawn went very well and he was transported up to the Cedar Run Wildlife Refuge the next morning.

The very next day a call came in from the wildlife rehabilitator herself. She had been contacted about another possibly abandoned fawn in Fairfield Township. Unable to respond, she called me for help and I was more than happy to escape my desk to take a short road trip. About 90 percent of calls received about abandoned fawns are unfounded because the mother is often in the area. It is normal for them to forage away from the babies and not return until after dark. For that reason, I anticipated the trip being more of a “wellness check” and following up the next morning.

I arrived at the property and the caller escorted me to the spot behind his outbuildings where he had seen the fawn. He told me that when he first found it, the little deer actually had waked right up to him, which is highly unusual. But sure enough, as soon as the fawn realized we were there, she got up and came trotting up to me. I was astounded but quickly realized that this little girl was just hungry. She had the telltale sign of tick-infested ears and head, and I wondered, with her being just a very short distance from the road, if her mom had been hit. The little fawn bleated loudly when I picked her up and we stayed there for almost half an hour, listening for any rustling or snorting in the woods. Nothing.

It was hands down the best part of my week! She also has been transported to the refuge and will be raised around other fawns so that she can regain her wildness and be released.

All that said, I want to caution anyone who comes upon an unaccompanied fawn. Please don’t touch it or even get too near it without consulting a professional first. It can be a full 24 hours before a doe feels it’s safe to return to her fawn without leading predators to it. Observe from a distance, call your local animal control officer or the CCSPCA to have a wildlife rehabilitator called in or consulted. You can reach us at (856) 691-1500 and your animal control officer can be reached through your police department.