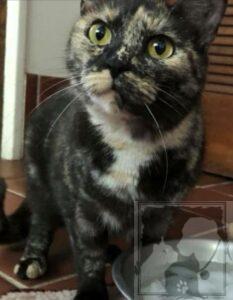 Every year, thousands of animals come through our doors at the South Jersey Regional Animal Shelter. They arrive on leashes, in carriers, laundry baskets, vegetable crates, cardboard boxes and many other more imaginative forms of conveyance. Some of the incoming animals weigh a few ounces, others as much as a couple hundred pounds. We have even had a shopping bag of goldfish left on our counter. The circumstances under which pets have been brought to us are also quite varied, and last week we had a couple of very interesting deliveries.

Early in the week when the days were sickeningly hot and humid, one of the animal control officers (ACOs) came in with a big, charcoal gray mutt who was wobbling along on a leash. The dog was unsteady on his feet and his eyes were sort of bouncing around. Quite frankly, the ACO looked a little worse for the wear, too, but when he started relaying the dog’s story, I understood why.

Earlier that day, a lady had run out for a few minutes to go to the post office. When she returned home, she heard some sort of racket coming from the yard and went to see what the source of the banging was. Her investigation led her to find the big dog struggling with something stuck on his head. It turned out to be one of those large, plastic tubs that cheese puffs and pretzel rounds come in. The container would not come off and the dog was struggling with the heat and lack of oxygen.

She ran in to call for help, and fortunately the ACO was able to respond quickly. By the time he got there, the dog was flat out and the homeowner was trying to free him of the container while hosing him down to try to keep him from suffering a heatstroke. Thankfully, the rescuers had come in the nick of time and were able to get his head free and his body temperature down.

“Pretzel,” as he came to be known by our staff, was incredibly lucky that he wandered into the yard of someone who happened to be home and quick to respond to his predicament. I should also mention that these kind homeowners came to the shelter and checked on him later that day and the next afternoon. Fortunately, by their second visit, he was already back home. It turns out that Pretzel’s real name is Dallas, and he was found about a half-mile from where he wandered off.

Another lucky guy, a little poodle mix, also suffered a brush with death but managed to escape with just some bad bruising. The dog was discovered near our front door, tied up to a tent post that had been erected for the Clear the recent Shelters event. One of our staff members was arriving very early that morning and saw a woman walk away from the dog, get into her car and drive off. It happened so quickly that our staff member was unable to intercede before she realized what was happening. It seemed like just another case of someone abandoning an animal, as we often find pets tied up or left in a box outside our doors. Once we got him inside, although his fuzzy coat had hidden it, we realized he was pretty banged up. The veterinarian that does daily rounds for us took a look at him and it was determined that he had most probably been “rolled” by a car and that X-rays would be needed to rule out any broken bones. As we were making plans to get him out to a veterinary hospital, in walked Alvin’s owners; he had run off from home that Friday night. It’s probable that the lady who tied him up had been the one to find him and simply didn’t know what to do with him in the wee hours of the morning. Thankfully she got him off the street and to a safe place.

Animals will be animals, and it is impossible to keep them out of mischief sometimes. If you happen to be sitting next to your pet while you’re reading this, perhaps you can have a conversation with him or her about the morals of these stories. First, NEVER leave the yard. And second, keep your head out of the treat jar!

Don’t forget, if you should lose your pet, call the shelter immediately. You also can file a lost report online at southjerseyregionalanimalshelter.org.